Chat is an engagement that allows you to live chat with followers. By default, every channel’s chat is enabled. If you want to be able to send and receive messages from your followers you will have to enable your chat.

Chat can be accessed by end user either through your channel page or through channel chat conversations.

How to communicate with your end users

First, you must take unanswered conversation by sending your first message to the end user.

Once you take conversation, conversation status changes to Active and your name is being shown as the owner of that conversation (visible to you and your customer care agents on web and partner admin apps).

If the conversation you want to take has been already taken by one of the other agents, you will receive a warning as shown below. By clicking on Yes, you will overtake conversation.

While you are having a chat conversation with your followers, you can preview their engagement history (see what coupons they have redeemed, if they earned points recently, received messages, etc.)  by a simple click on the icon

located at the top right-hand corner.

next to the message input field.

There are two types of locations: 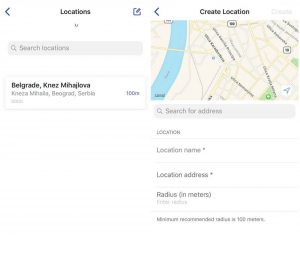 Find your address. You can also move the pin to get a more accurate position on the map. 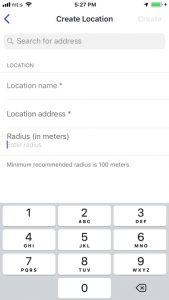 Optional field. If you leave this field empty (radius is set to 0), a location will be presented as your ‘shop location’ inside your channel page.

If you would like to use this location for live proximity targeting purposes, enter the desired radius in meters. Minimum recommended radius is 100 meters. 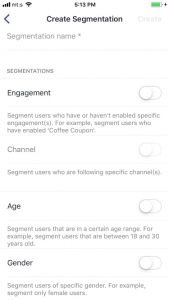 This field can be used to target end users who have or haven’t followed your second channel. You can also target users based on how long they have followed a specific channel.

Target end users that are in the certain age range.

Example: Segment users that are between 18 and 30 years old.

Notice: this segment will work only for the end users for which we have age parameter known.

Target end users based on their gender.

Notice: this segment will work only for the end users for which we have gender parameter known.

Target end-users who currently have less, exact or more than a certain amount of points in your loyalty programs.

Example: segment end users who currently have more than 1.000 points in Points Loyalty.

Target end users who have accumulated in a total time of loyalty – less, equal or more than a certain amount of points in your loyalty programs.

Example: segment end users who currently have more than 10.000 points in Gamification Loyalty.

Target end users from your gamification and advanced loyalties based on their current level status.

Notice 1: first you must select loyalty and then you will have an option to choose levels. You can select only one loyalty.

Notice 2: to segment end users from one level you will have to select the same level in both “from” and “to” sections.

Segment users by their language.

Segment users with one or more custom lists. Upload a custom end-user list from the web and use it to create a segment. Follow instructions and guidelines for list upload.

Access the complete list of your admin Users. Here you can create new Users, edit and preview existing Users and their statuses. 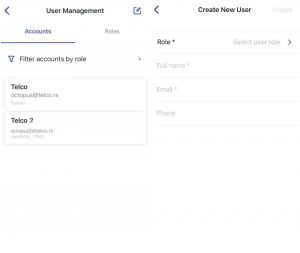 On edit, you can change details about your users, change their password or disable them.

Enter the name of the user (e.g. Peter Peterson), email that user is using to log in, phone number (optional) and select one of the existing roles that will be applied to that user.

Once created, User will receive email (to the email provided above) with the link to setup password. Once a password has been entered, User can log in to the system and manage parts that are available for the role that User has. 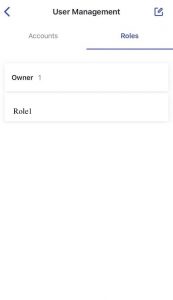 Here you can create roles that will be used by your admin users. 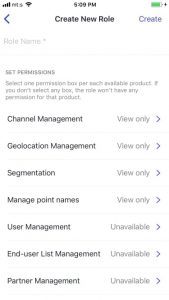 Here you can name your role and select what parts of the admin interface your Users can access to. 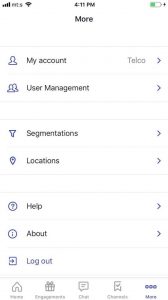 On my profile account, you can view your user name, address and phone number and manage details within your account, change your password or set a pin to lock your screen. 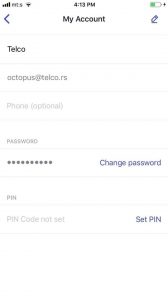 Here you can see your balance from your add-on purchases (Add-on wallet). Click on purchase add-ons to request new add-ons and buy more Gigabytes, Tenant points, Terabytes or Tenant Vip from your Tenant.

A complete list of all your requests for add-ons with request date and approve/reject dates. Here is where you can cancel your pending requests if you have changed your mind.

Information about your current package and monthly/yearly price. Here you can request to change your partnership package.

A complete list of all your requests for partnership packages with request date and approve/reject dates. Here is where you can cancel your pending requests if you have changed your mind.

Shows your brand name in the system, country and website (entered upon partner registration step).

Click on “Purchase add-ons” to open add-on selection screen. Select at least one new add-on that you would like to purchase and click Request button to send a request to the Tenant.

You will receive an email once your add-on request has been approved or rejected and you will see the change in your account balance and account activity.

What are you looking for?